I went for a short visit to the future, and I came across these history notes. I thought I would share them with you. 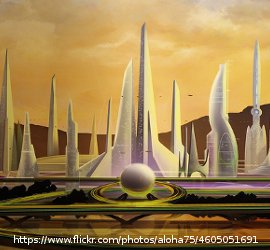 100 years ago today, the Earth was a very different place. You may be surprised just how different it was. Here are some of the things that characterised that time, and strange as it may seem, they are all true.

The earth was divided into imaginary areas called countries, and the people who lived in those countries often fought each other, and sometimes even fought each other inside them. Each of these imaginary spaces had leaders, some were elected, and some were there by force. People who lived in those imaginary spaces believed they were real, and acted as though they were.

People believed in imaginary entities called gods, often just one, which were often thought to be all powerful and all-knowing. Some people even believed that if they begged hard enough, one of these imagined entities would grant their wishes no matter how trivial or important. They even had special buildings that you could go to in order to have an imagined one-way conversation with your own particular version of one of these imaginary entities. Even as recently as 80 years ago, people often fought one another over which version of their imaginary god was the correct one.

The combination of imagined entities (gods) and imagined spaces (countries) was particularly problematic, and caused a lot of unnecessary strife. But they had another imagined thing as well back then, they called it ‘race’. It had no basis in reality whatsoever, and this was known at the time, but people still believed in the notion. It really messed with their heads, and caused untold amounts of strife.

Strange as it may seem today, many people believed in a binary view of human sexuality even though this view was known to be wrong. Only a few of those imaginary spaces called countries allowed same-sex marriages, although it was beginning to change, and in some people persecuted people who established same-sex relationships. Other types of sexuality and gender identity, and other types of non-binary relationships, something we take for granted today, were generally not accepted. You may be surprised that what was called the USA  back then only made same-sex marriage legal 100 years ago yesterday! This situation was particularly bad when religions were involved, with the colonial legacy of religious dogma having a particularly vile effect what was referred to as the LGBTQI community in some parts of Africa. Given the leading role that Africa plays in the world today, it is hard to believe they were that backward and still under the influence of such colonial ideas only 100 years ago.

Let’s turn to energy, which in those days was based on central generation and distribution by a massive and very expensive wire grid that was ugly, and high-maintenance. Well, it is not totally gone even today, you can often see its legacy in places like urban street lights, and in the area of large factories that need lots of energy distributed around the factory premisses. Anyway, power plants back then were huge, and very bad for the environment because they burnt coal, used nuclear, or even dammed up rivers to produce what was called hydroelectric power. Power generation plants were awful things, and they often broke down, leading to a situation where there was enough power on the grid to meet demand. Whole areas often went without power for hours, or even days, creating misery and lots of traffic congestion. Can you imagine living like that, it is worth taking a moment of silence to respect our poor ancestors, and to thank the inventive minds that gave us local power production. I am so glad I don’t have to live like that.

While we are on the subject of energy, people drove personal transport vehicles, or cars, in those days. There were lots of places that you could not go by public transport, and even a lot of public transport comprised fossil fuel burning, air polluting monsters. Some cities were so polluted by this that people died of asthma and other conditions. Such toxic air was considered normal, and accepted by the population of the time, strange as it might seem.

People also believed that genetic manipulation was bad, so things that we take for granted these days, such as stem cell cures, limb and organ regrowth, neural regeneration, genetic repair or diseased cells, and genetically modified food, were the subject of much protest. There was a big powerful country back then, called the USA, and one of its presidents actually banned stem cell research, can you believe that? That is just too weird to imagine.

If you think that was weird, in those days technology was outside the body. You could not buy cloud based brain enhancements, neither memory nor thought cycles. I know that brain enhancements have still only reached 89% of the population, but still! Can you imagine living without having the sum total of human knowledge immediately available in your brain, or being able to store memories for better retrieval? It must have been so weird! You actually had to find information using visual technology called a web browser and process it with your own brain! It was so slow and cumbersome. People’s awareness of the world around them was limited to their mammalian senses, no cloud-based, brain-connected sensor networks existed in those days. Global Brain Enhancements (GBE), the biggest company in the world today, didn’t exist 100 years ago. And speaking or writing were the only ways to communicate! No think to send existed! Cars actually had to be driven by a person, and even those quaint air devices called planes had to be flown by a human pilot. Eish, what a waste!

Something recent that relates to the past! This week saw the Prison for Corrupt Politicians just outside Luna City on the moon being officially closed. It was built before the invention of public audit Artificial Intelligence, but unfortunately too late for the imprisonment of the corrupt South African politician Jacob Zuma. However, his great grandson spent 17 years there before breaking through the wall in an escape attempt and dying of vacuum-induced asphyxiation. Apparently he did not realise there was no air on the moon. He shared the prison with politicians from nearly every country in the world, with the exception of Iceland and Norway. Thankfully, it is no longer needed!

In those days, a hundred years ago, people were foolish enough to believe – if they thought about it at all – that it didn’t matter that software was proprietary. They thought people who fought for software freedom were nut cases. Of course, that was before the predecessor to GBE, Nannosoft Brain Technologies, introduced secret control routines into the firmware controlling our brain enhancements. Fortunately, this was discovered before it could do a huge amount of harm, though I still have nightmares about the 11 million people who died from the Nannosoft Brain Tech Virus. Scary stuff. Thank goodness my brain runs Mentalinux.

I wonder what they will think of us in 100 years!