And now for something comepletely different: Lithophyllum cuneatum KEATS, a new species that I discovered in 1994, which is the white stuff on the pinkish stuff in the photo below. 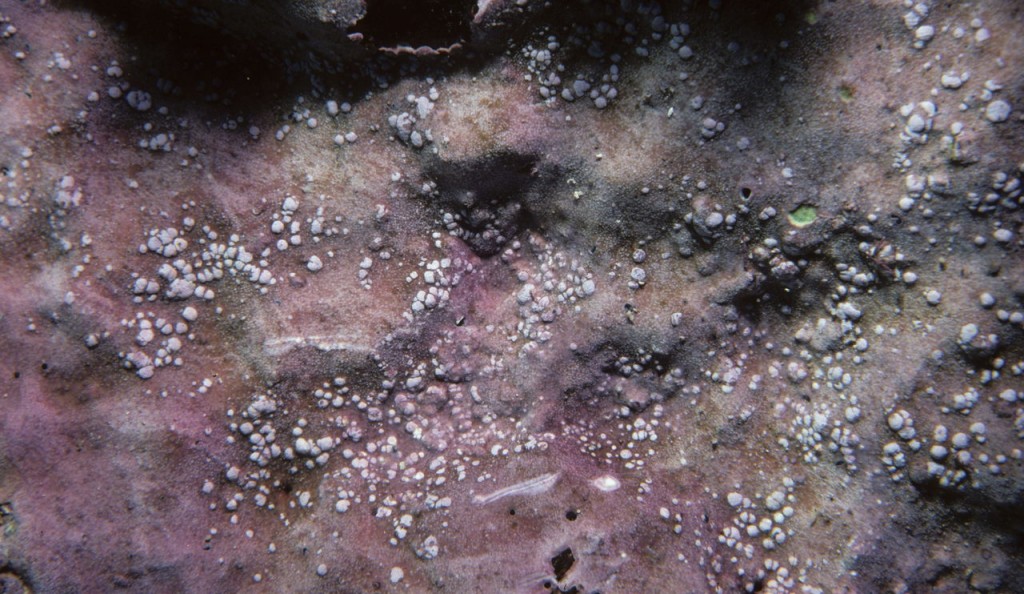 The both belong to the coralline red algae. Coralline red algae are common intertidal and subtidal inhabitants from polar to tropical regions of the world’s oceans. They are the only red algae in which most vegetative cell walls are impregnated with calcite, the most stable form of calcium carbonate. Other red algae have the less stable aragonite form of calcium carbonate. They belong to the red algal subclass Corallinophycidae, with corallines falling into three orders, the Corallinales, Sporolithales, and Rhodogorgonales.  Both of these species are in the Corallinales.

The pinkish stuff is Porolithon onkodes, one of the most common coralline algae on coral reefs, and probably without it, coral reefs would not exist. Lithophyllum cuneatum is colourless, which suggests it gets its nutrition somehow from the P. onkodes, but nobody has ever studied it enough to know. Inside the host, it looks like an inverted cone, but there are no obviousl connections of L. cuniatum with the host, though I have only looked at the scanning electron microscope level.

It just goes to show that there are so many more things in the sea, and so many more processes than we understand. Lots of work for budding marine biologists.