Skip to content
Home » Education » Student fees and the iron triangle: the solution is easy
Spread the love
Tweet

Currently in South Africa, here is widespread national protest in higher education institutions against increases in student fees. These protests are taking place against a backdrop of widespread government corruption, a pretty stagnant economy, widespread unemployment, widespread poverty, and low incomes even for educated professionals. Given that the issue of access to education was a major feature of the struggle for liberty in South Africa, the increase in university fees is both necessary and morally indefensible.  This is a logical paradox. 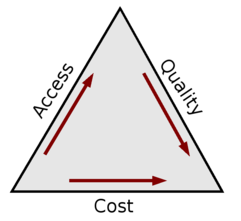 The iron triangle of higher education

One of the many things I learned from Sir John Daniel over drinks at a hotel in some warm country that I forget now, possibly Tanzania, is that there is a rigid iron relationship among access to education, its cost, and its quality. He calls this the iron triangle of higher education. The logical paradox arises from this triangle.

Countries who have broken this relationship have done so by having strong enough economies to allow taxes to cover all costs, thus not really breaking the relationship, just meeting the costs from a different basket. Some countries have accepted that their economy dictates that quality will be lower in order to maintain access.

The best solution to this conundrum would have been to have not caused the economy to stagnate, not allow such widespread corruption in the first place, and to grow investment in education along with economic growth. But in a stagnant economy like ours, it will be very difficult to break out of this.

I agree that higher education should be free for all, irrespective of their economic status. To the extent that rights are real, this should be a right of citizenship.

In South Africa solving the need for free education for all, and addressing other aspects of the education challenge, can only be achieved by the following means: