In part because of the protests of last week for zero increase in student fees, and ultimately for free education, there is a growing awareness that higher education in South Africa is in a mess. They are increasingly forced by circumstance to operate as if they were businesses, albeit ones that are not designed for profits. Part of the circumstance is that they are underfunded by government, and unable to deliver on the promises of creating opportunities for those from poorer backgrounds. Another part of the circumstance is that they are unimaginative, resistant to change and unable to innovate, so they are stuck in a mode that was better suited for previous millennia than to the 21st Century, particularly, the 21st Century in a country such as South Africa.

In a way, South African universities comprise a market place for higher education, but they are like a market place where the only products for sale are bananas. They differ only in the flavour and ripeness of the bananas on sale. Some bananas are in the top 400 varieties of bananas in the world, some are historically more plantains than bananas, some are green, others are perfectly ripe. But bananas alone cannot sustain human life. Which ever way you look at it, a market that only allows for the sale of bananas would be seen as unimaginative, and not very innovative. 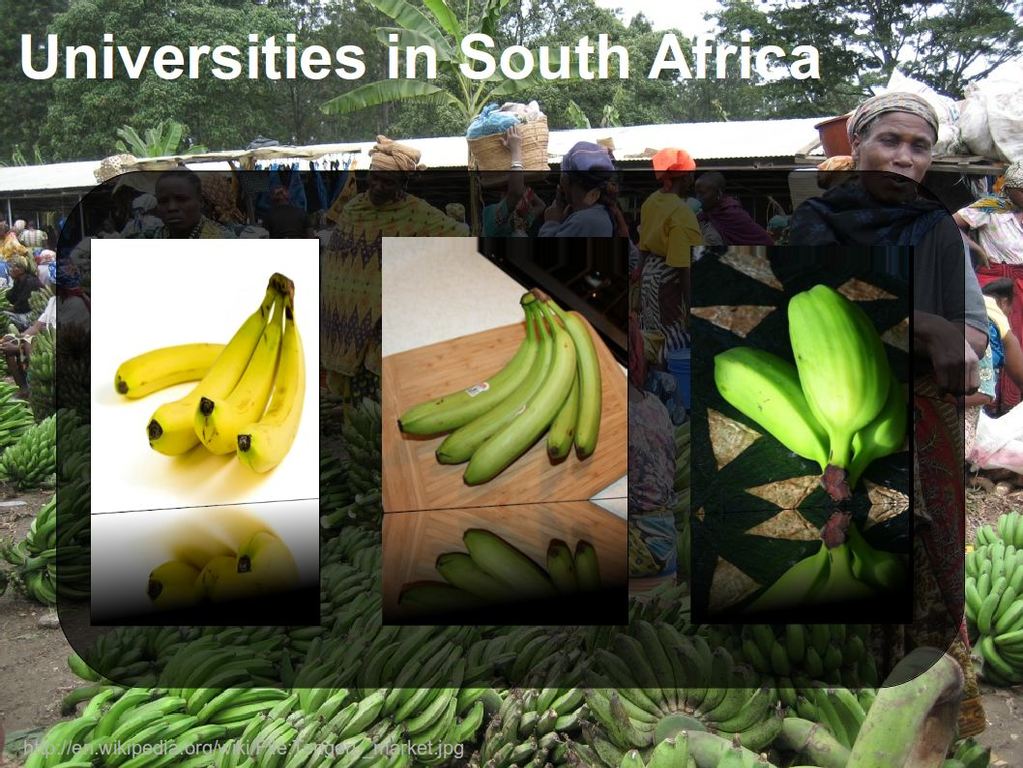 A market selling only bananas: a metaphor for South African universities

Like the banana market, it is not only the universities themselves that are unimaginative and lacking capacity for innovation, the whole system is stuck in the same rut. A few years ago, the Minister of Higher Education & Training appointed task teams to investigate appropriate models for new universities in Mpumalanga and the Northern Cape. Two new universities were announced in 2012, and these are being developed in Kimberly (Northern Cape), as well as Nelspruit and Siyabuswa (Mpumalanga).

What an opportunity was missed! We could have done something new and innovative, designed institutions for the 21st Century and South African context, but instead we opted for adding two new sellers in the banana market.

I have spent 22 years in higher education in South Africa, and I been involved as a senior management person in two universities for over 10 years. I know how universities operate. I have seen first hand the utter and total lack of imagination and inability to innovate even on a small scale. To create two more of these behemoths is a tragedy.

It relates to the current demands for free education because I believe that it is possible to create an entirely different kind of institution, one in which the students are paid – not required to pay. Such an institution would not be structured around classic disciplines, it would have classic disciplines represented, but not as a primary organising force. Instead it would be structured around innovation. Students would work in multidisciplinary teams, deliver products that would generate revenue. The customers of this innovation could be ordinary citizens, businesses large and small, NGOs, government, and of course each other.

This is possible, it can be sustainable – I have looked at business models and run some of the numbers. But it requires thinking out of the box. It requires believing that we can achieve anything if we put our minds and creativity to it. It requires starting with the design, and then figuring out how to make it happen. It is not about selling more bananas, or subsidizing particular bananas. It is about giving all South Africans a chance to excel, and to be rewarded for excelling, rather than having to pay for it. Above all, it requires the democratically elected government to act in the interest of its citizens.