Skip to content
Home » The natural world » Birds and bird photography » Ndumo: birds of prey with adaptations to the forest
Spread the love
Tweet

We took a five days in the second week of August 2016 to visit Ndumo Nature Reserve in northern KwaZulu-Natal. Ndumo is located in the far northeast district of KwaZulu-Natal Province known as Maputaland,  on the border with Mozambique and adjacent to Swaziland where the Pongola River joins the Great Usutu River. Being an avid bird photographer, though still a relative newbie, I had long thought of visiting Ndumo as it has recorded over 430 bird species when residents and seasonal migrants are included. The reserve is 10 117 ha in extent, with some land lost on the opposite bank of the Pongola river due to invasion by the adjacent community, who are using the land for farming.

From a birding perspective, a key feature of the area is that it is the southernmost limit for several eastern and north-eastern African bird species. Combine this with the diversity of habitats, the extensive riparian vegetation, with rivers and pans, and it sounds like a birder’s paradise. Even in winter I hoped when planning the trip somewhat at the last minute.

Ndumo habitats are very diverse for the size of the reserve, and include sand forest, dense riverine forest, floodplains, alluvial plains, reed beds, grassland, broad-leaved and acacia woodlands and extremely dense thornveld. There are many pans that are filled when the Pongola & Usutu Rivers overflow their banks, and together with the floodplains and rivers themselves, there is an abundance of habitat for many aquatic species. The area is designated as Wetlands of International Importance (Ramsar wetlands) to help protect and conserve the habitat and its species.

Unfortunately, there has not been much rain in the river catchment area for some time, and the local rains were also much reduced in the past rainy season so it was exceptionally dry. The pans were either empty or much reduced in extent and depth. Many of the specials were not present, or not visible, although according to ranger Joseph with whom I did an early morning walk along Nyamithi Pan, the flamingos are more abundant than usual for this time of year due to the shallow water.

Despite the poor conditions, there is always something interesting on a birding trip no matter what the situation or conditions. The best place for birding was along the edge of Nyamithi Pan, in the campsite, and especially along the Mtikini 4X4 route to the Red Cliffs Picnic Site.

Along the Mtikini 4×4 route,which follows the Usutu River,  there is an abundance of riverine forest, especially fever trees (Vachellia xanthophloe), and sycamore figs (Ficus sycomorus). The road passes through areas that are closed canopy, and open, with patches of scrub in the open areas that have greenback camaroptera, gorgeous bushshrike, and others. However what I want to write about here are the two raptors and their adaptations to the forest habitat: African harrier-hawk (gymnogene), Polyboroides typus and Crowned eagle, Stephanoaetus coronatus. 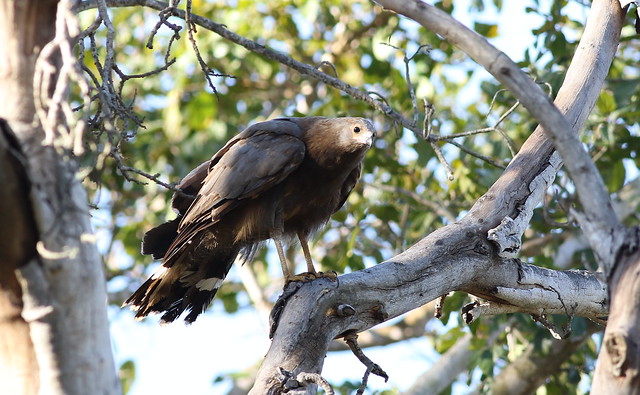 African harrier-hawk perched on a branch

While driving through the sycamore fig forest, we spotted an immature African harrier-hawk high up in an old fig tree, where there were dead branches with peeling bark. It was not a great spot to photograph it, so we stopped and waited, watching as it extracted a scorpion from under a piece of bark, ate it. It then moved to a dead tree that was more in the open, though still under the canopy of the fig trees. There it put on a lovely display of the hawk’s adaptations that are well suited to tree life. 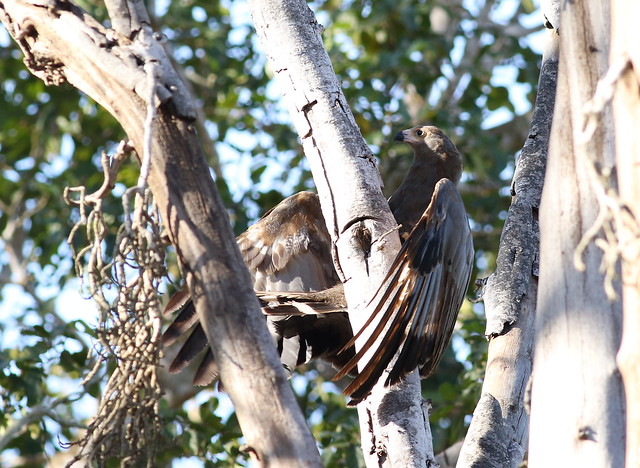 It is able to hang upside down, twist its body, and peer into holes and under bark looking for reptiles and invertebrates such as insects and scorpions. It can even walk down a tree branch at a nearly vertical angle. It can do this because it has a ‘double jointed’ ankle which allows it to flex backward and even a bit sideways. It also has a behavioural adaptation, in that it can use its tail and wings, as well as its legs to brace itself in position as it seeks its prey. These same adaptations enable the African harrier-hawk to raid the nests of cavity-nesters such as barbets and wood hoopoes looking for fledglings. 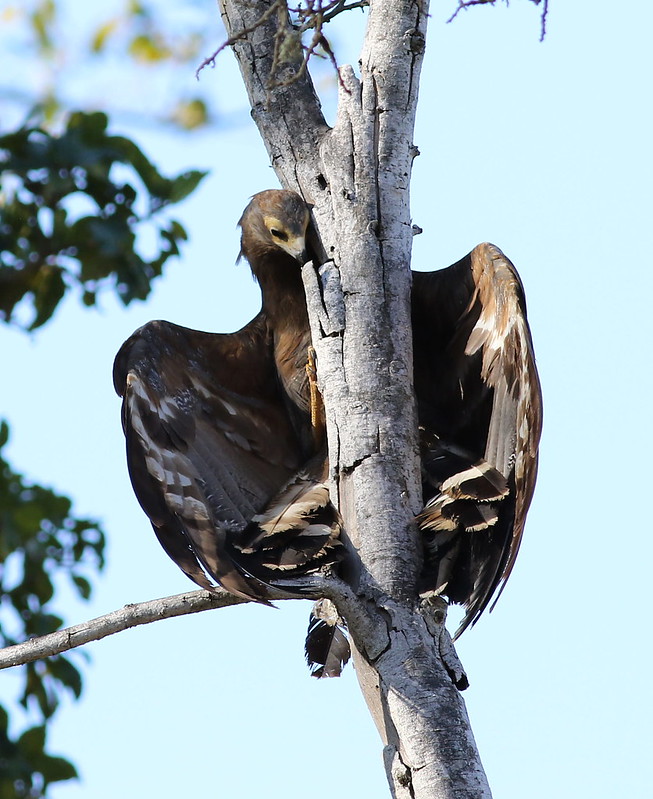 Using its wings, tail and feet to position itself. There is a scorpion under the bark.

Of course, the African harrier-hawk doesn’t only feed in trees. One took out a grey go-away bird in my back yard in Johannesburg a couple of years ago, and sat up in a palm tree eating it just like any other hawk would do. 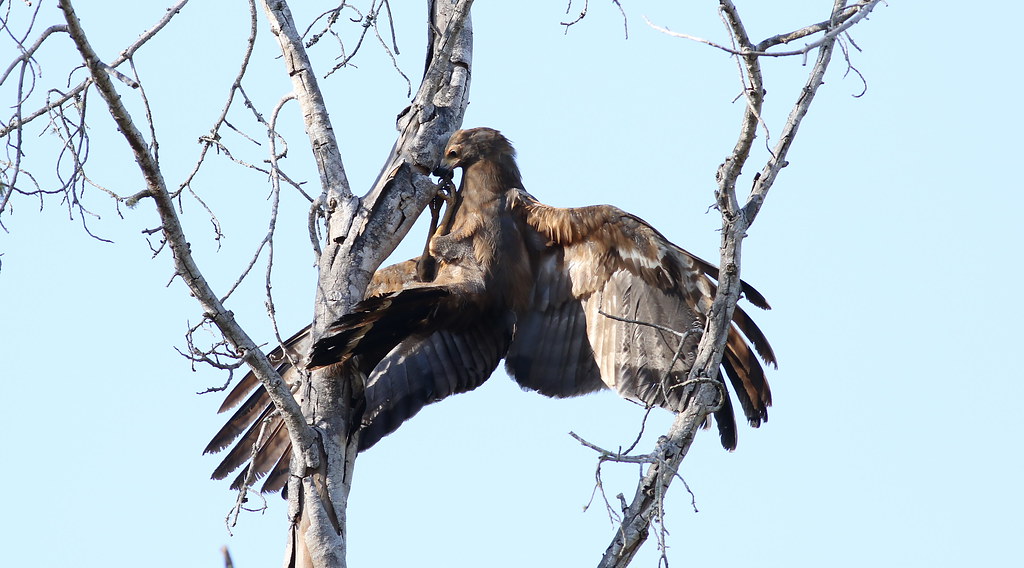 It’s all about balance.

The next day, driving along the same route, we stopped to try (mostly unsuccessfully) to photograph a square-tailed drongo. Having abandoned the attempt, about 200m further on we came across a crowned eagle, Stephanoaetus coronatus, high up in a fever tree close to the road

The crowned eagle is considered Africa’s most powerful eagle because of the weight of the prey items that it takes. This eagle has unusually large talons and very strong legs, and it can kill by crushing the skull of its prey.  Despite being a large and powerful eagle, it has relatively short wings, and a long tail. These are its adaptations to life in dense forest environments. It makes it more manoeuvrable among the trees.

It was lovely to experience these two forest predators at Ndumo, despite the dry conditions. I have the impression that Ndumo will be well worth a visit in the November-January time, despite the heat that will be there at that time. Perhaps next year. 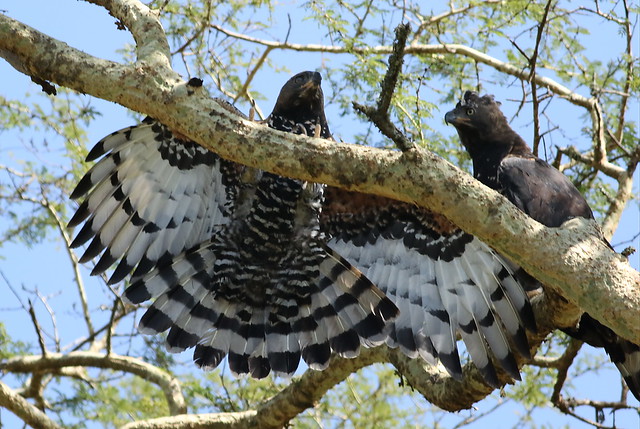 Short wings and a long tail make it at home in dense forest.

Please visit my flickr page at if you want to see more photos of these and other birds from Southern Africa. Look in the Ndumo album.