This article was published in Diver magazine in 1990.

In the sky there is only one moon, but the sea can be packed full of small gently-drifting moons, among which the neutrally buoyant diver can float like an astronaut of magnificent proportions. These lunar animals are, of course, moon jellies (Aurelia aurita), and despite their benign appearance they can be voracious predators on the tiny zooplankton which drift about helplessly in the sea. They are completely harmless to divers, however, unlike some of their relatives among the group of animals we know as jelly fish.

The word jelly is aptly included in their name for, being 95-96% water, they indeed resemble nothing so much as a moulded bowl of Jello. But fish they are certainly not. Moon jellies belong to the Class Scyphozoa of the phylum Cnidaria, or coelenterates; the phylum which also includes the sea anemones, hydrozoans and corals. Many Cnidarians have two alternative stages in their life cycles; a polyp and a medusoid stage. The polyp stage is generally small and attached to rocks, to plants, or to other animals. You may remember Hydra from high school biology as a typical example of a polyp. Sea anemones and corals are also polyps. Polyps bear a ring of tentacles around the mouth. These tentacles contain stinging cells, and are used to catch tiny planktonic prey. The medusoid stage is what we call “jelly fish”, and they generally float freely in the water column.

The moon jelly is unlikely to be confused with any other jelly fish. It is easily recognized by its umbrella-like appearance, and the four horseshoe-shaped gonads which are visible inside the animal. The body is translucent, and whitish to tawny in colour, while the gonads are opaque and may be pink or whitish. A close look at an adult moon jelly will reveal a complex system of canals which radiate from the gut. They can grow quite large; up to 30 cm in diameter.

The mouth is found in the middle of the umbrella on its under side. There is a conspicuous lip, called a manubrium, which extends away from the mouth and is drawn out into four short arms. The tentacles which ring the umbrella contain stinging cells, but these are weak and evidently not used to capture prey. The prey of adult moon jellies is small zooplankton (microscopic animals which drift about in the water). The food animals stick to mucus on the under surface of the umbrella when they accidentally come into contact with a sinking moon jelly. The mucus, together with its trapped prey, is moved towards the manubrium by tiny beating hairs called cilia. Globs of plankton-filled mucus accumulate near one ef the arms, which then licks them off and transfers them to the mouth via ciliated grooves. Like all cnidarians, moon Jellies have no anus, so the mouth serves a double function! 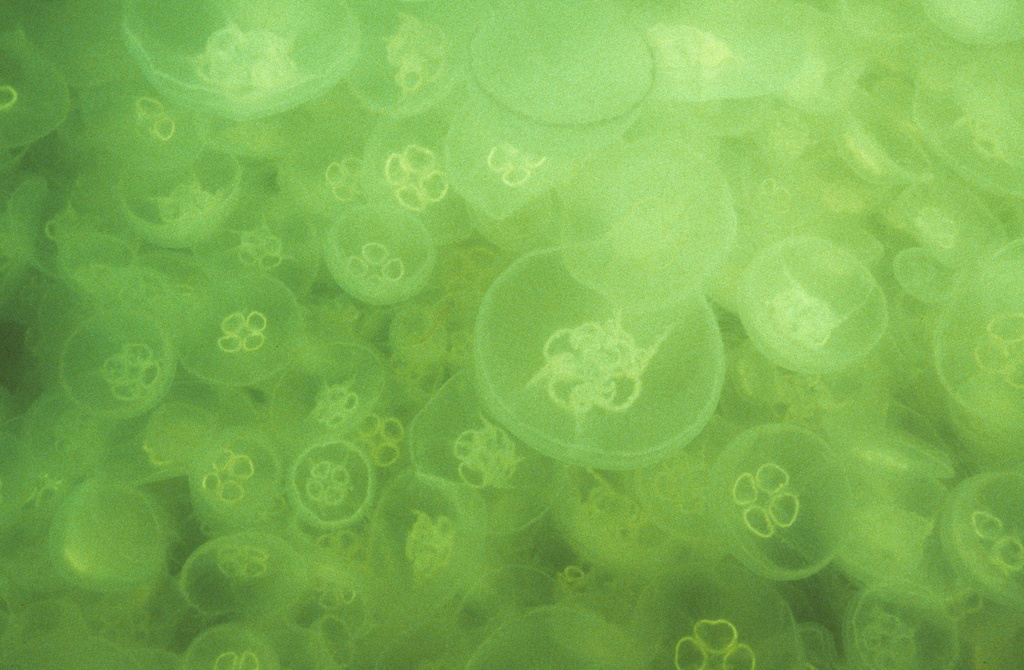 Moon Jellies are only an ephemeral beauty, living as they do for but a few short months. Young moon jellies appear with the spring thaw. At this stage they bear little resemblance to the adults, having eight distinct arms and measuring only about half a centimetre across. They are very secretive at this stage, and spend must ef their time hanging out near the bottom, where they gradually change shape and become more like adults. They reach sexual maturity in July near Cape Cod, but not until August or September in eastern Canada.

Moon Jellies have no special organs For ensuring the transfer of sperm to egg. Eggs and sperm move from the gonads into the gut cavity, and are released through the mouth, probably when the adults are aggregated” Sperm are simply released into the water, but the eggs become lodged in a pit in the arms of the lip where fertilization takes place. The developing larvae are brooded for a short while before being set free.

The larvae soon settle down onto seaweeds, eelgrass or other supports in shallow water, and develop into the over-wintering polyp stage, or scyphistoma. The scyphistomae, which are 5—16 mm tall are mass production factories engaged in the automated manufacture of young moon Jellies. The medusae simply develop as a stack of buds, one atop the other on the scyphistoma, giving the whole structure the appearance of a stack of tiny lobed saucers. It is the continuous production of medusae From the scyphistomae that enables the moon Jelly to become so abundant.

And as the photograph shows, they can indeed become abundant. Of course, they are not as numerous throughout the sea as they were in the area where the photograph was taken. In fact, they often occur in dense aggregations, which are the result of the concentrating effect of currents in hays and along coastlines. This process of concentration is something over which the moon jellies have little or no control, since they depend on passive transport by wind and currents.

Unusual among Jelly Fish, moon jellies have eye spots and so can detect light. Light has been shown to accelerate the rate of pulsation of the umbrella. This may allow them to move up and down in the water at different times of day along with their prey, or it may help to keep them in shallow water where they are mere likely to be concentrated, along with their prey, by wind and currents.

Moon jellies occur from Greenland to the West Indies and, although a number of species have been described, they probably all belong to a single cosmopolitan species. They are most abundant in sheltered bays and can even penetrate the water of estuaries with about half the salt content of ocean water.

Although moon jellies are predators, they are not without predators of their own. To lumpfish they are a much sought after food item. I have seen concentrations of cunners fiercely attacking a moon jelly, although it may already have been damaged before the attack began. They also fall prey to the long stinging tentacle net of the northern red jellyfish. 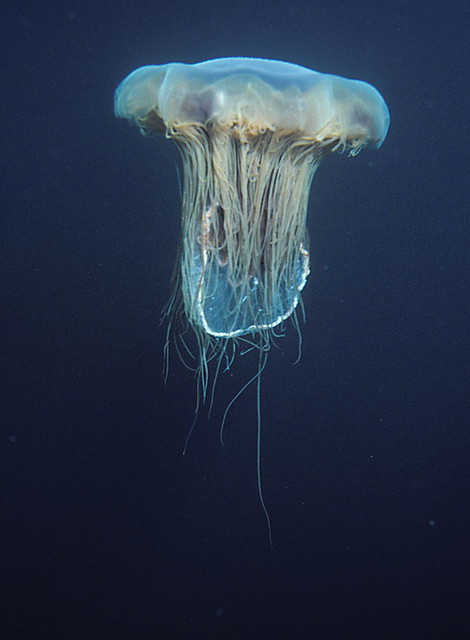 Moon Jellies are frequently hosts to large numbers of parasitic crustaceans called hyperiid amphipods, which ride along like little pilots on the surface of the umbrella.

I have often noticed an interesting relationship between larval codfish and jellyfish such as the moon jelly. These tiny young cod seem to prefer swimming near a floating object, which presumably makes them less visible to predators. Large concentrations of moon jellies often harbour a number of and larvae.

These lunar animals provide us with another example of the fascinating types of marine life which evolved to take advantage of the sea as a home. They also reveal the many ways in which organisms can interact with one another, as well as with the physical environment. The next time you are diving, and you see moon jellies in the water give them more than just a passing glance. You may be surprised by what they can teach you.