Skip to content
Home » The natural world » Diving, underwater and intertidal » The wrymouth a ghost of a fish
Spread the love
Tweet

Ghost fish seemed an appropriate name the first time I saw one, For a fleeting second, in the light of my diving lamp; a whitish spotted head protruding from the mud disappeared as it swallowed up by the sea floor itself. Closer inspection revealed a 10 cm diameter hole in the mud bottom into which this strange fish had retreated. Finally, I had seen one of the animals which must be the owners of hundreds of similar holes I had seen on numerous daytime dives over muddy bottom.

Many times I’d been asked by divers, “what makes those holes”, but I had never been able to give an answer. Now I was a little closer; I had simply to see one for a long enough time to be able to identify it. About forty minutes later, near the end of the dive, I spotted another ghostly head sticking out of the mud. It remained still long enough for me to recognise it as a wrymouth (Cryptacanthodes maculatus), also known as a ghostfish.

One thing we do know is that taxonomically they belong to the suborder Blennioidea, which also includes the wolffish and ocean pout. They are distinguished from all other members of this group because they lack pelvic fins. They can attain a length of about one metre, but they are rather more thin and eel-like than most other members of the Blennioid suborder. Colour varies from brownish to reddish brown, with a pale greyish-white belly. The upper part of the body has three irregular rows of dark spots running from the tail to the top of the thickly spotted head. 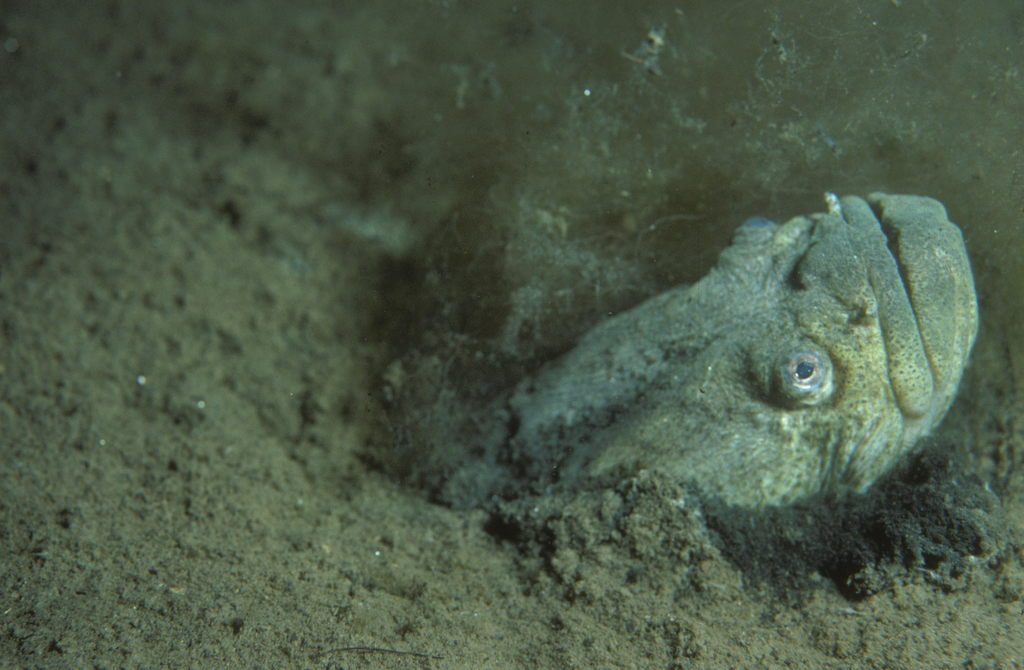 A ghostly head protrudes from the mud. They may look spooky when seen in the light of a diving lamp, but I have never seen them do anything except look spooky.

The ghostfish is found along the Northwest Atlantic coast, from southern Labrador to off the New Jersey coast. They occur in relatively shallow water, from one to around 160 metres, and are probably more common at the deeper extreme in the southern part of their range. What little is known of their food suggests that they feed mainly on amphipods and mud shrimp. How, where, and when they feed remains to we determined.

We also know that they are confined almost exclusively to muddy bottom, where they build extensive interconnected burrow systems in the soft substrate. What goes on inside those burrows, where they presumably spend most of their time, remains unknown, and probably will remain a mystery for some time. Muddy bottoms are difficult places to do biological diving, because as soon as the diver comes close to the bottom, the sediment is mixed into the water by even the slightest movement. Within seconds, visibility can be reduced to nil. Even digging the fish out would not tell us much as we would have no idea what goes on inside the burrow.

Nothing is known about the reproductive biology of the ghostfish. Small but well developed fry have been recorded from the northern parts of its range in early spring, suggesting that spawning may take place in winter. Eggs and early fry are completely unknown, at least suggesting the possibility that spawning may take place inside the burrow system. Nothing is known about territoriality, mating strategies, or whether they provide parental care.

To me it is wonderful that there still exists an animal which is so poorly known. The ghostfish guards its secrets well! Perhaps, however, there is an enthusiastic graduate student who would like a research project that presents a good old fashioned challenge. Newman Sound, in Terra Nova National Park in Newfoundland is the perfect place for such a study.