This morning I arrived at my computer to see a post from my brilliant friend and former colleague, Prof Barry Dwolatzy, made on ventureburn, entitled “Innovation, tech transfer can help South Africa to address triple challenges“. The triple challenge that he refers to is alleviating poverty, reducing inequality and creating jobs, all of which are related faces of the same triangle. Here I will consider the third challenge to be growing the economy, for which creating jobs is a proxy. In my attempt to represent this diagrammatically, I have placed some (but not all) elements of the innovation agenda inside the triangle. These are the things that could be addressed through the establishment of businesses and organisations designed to tackle them. 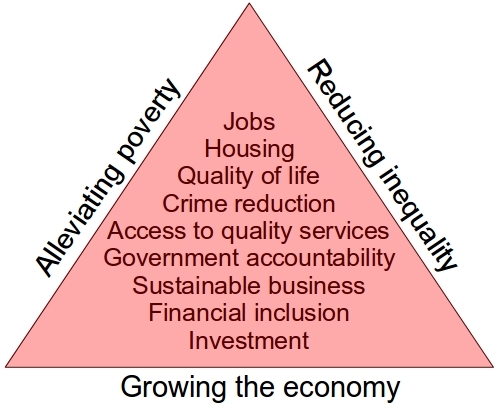 Socio-economic triangle – critical things to be achieved in South Africa, and how an innovation agenda could help solve them in a sustainable way.

This socioeconomic triangle is not complicated, and many of the things that are contained in it are also contained in the National Development Plan. This piece of exhaustive planning work is largely being ignored by the ANC government today, just as they are ignoring all other policies that might get in the way of self-enrichment. But a time will come when we have a government that can behave responsibly, and get a national innovation agenda off the ground.

Clearly for this vision to be realised, there is much that needs to be done. Not least of which is for government to move from being irresponsible and immature, and acting like spoilt children out for their own interests. Government will have to begin to take their responsibilities to the country and its citizens seriously. This is not just wishful thinking, it has existential implications for South Africa as a global and continental player.

As a commentator on Barry’s Facebook post noted, we can bring in the ideas of Moeletsi Mbeki here. We have to change the discourse about South Africa, and about the South African story. With apologies to Thomas Kuhn, we need a paradigm shift in how government thinks. We have to submerge our obsession with the pseudo-notion of race, and focus on solving the biggest problem we face: our economy cannot support our population. To quote Metallica lead singer and songwriter, James Hetfield, “Nothing else matters”. 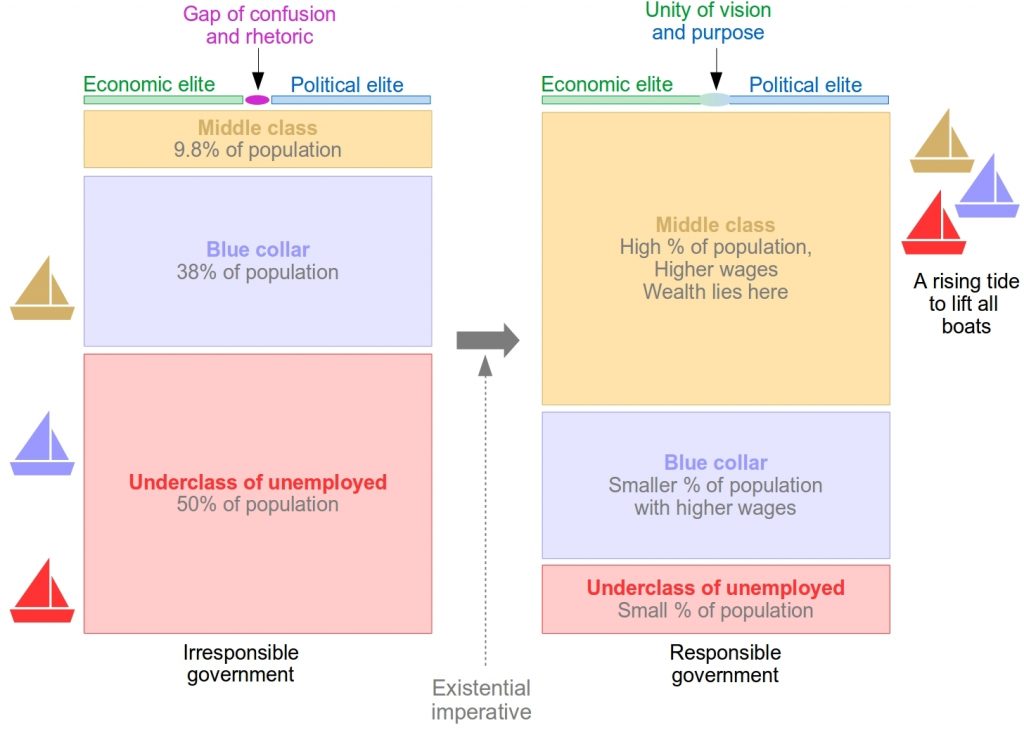 As I said previously, our discourse is broken. A responsible government will take the necessary steps to change our discourse from one dominated by race, and blame (which is not the same as saying everyone is blameless), to one of solving the three challenges that Barry mentioned. It is only by changing the discourse that we can see the amazing opportunities laid out in front of us with the innovation economy that we can build. This is not a pipe dream, it is an existential imperative for the South Africa of the original ANC founders.

The sad thing is that we know how to do this. We even have it in policies such as the National Development Plan, and – on a smaller level – the national FOSS policy. It is a basis of much of the thinking around technology transfer that Barry writes about, and the in organisations such as the Technology Innovation Agency (TIA) and the National Intellectual Property Management Office (NIPMO).

Of course for Barry’s ideas and those articulated here to come to fruition, there would have to be some vertical and horizontal cross cutting in government too. In 2002, I was involved in putting together a team to create an area for technology innovation in Cape Town. There was a vacant piece of land directly bordering two universities. We had investors, we had tech companies willing to relocate and become anchor tenants, we had incubator experience with the bandwidth barn. But the land belonged to the provincial housing board, and their vision was not one of homes in areas with employment and recreation (which is what we would have provided), it was one of a flat piece of land covered in drug and crime-breeding house-boxes. The whole initiative fell flat because there was nobody who could solve the land issue. And as far as I know, the land is still unoccupied. And the innovation initiative died.

So, to make an innovation economy work in the SA context, we would also need something like the Innovation-Corps within government. Their role would be to ensure that there is cross-level (city, province, national) and cross department capacity to remove barriers. We do not have a strong history of cooperation within government in SA. The government innovation corps would have to be in the Presidency of a president who cared about the country, which hopefully one day we will have.

Imagine what could be achieved if we had the following:

I will write more about what a university would look like if designed in for this imagined South Africa in another post.

The bottom line, however, is we will not get out of this hole if our politicians keep digging it deeper.